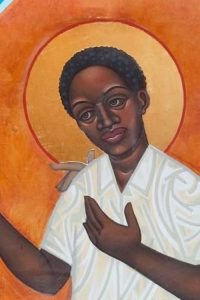 “I will be baptized in my own blood.”

Manche Masemola was born in a small village South Africa. She lived with her parents, two older brothers, a sister, and a cousin.  There was a small Christian community was widely viewed with distrust by the remainder of the tribe who still practiced the traditional religion.

Masemola attended baptismal classes against the wishes of her parents. Her parents claimed that she had been bewitched and was prescribed a traditional remedy, which her parents made her consume by beating her.

Relations worsened, and the mother hid the girl’s clothes so she could not attend baptismal classes. On February 4, 1928, her parents led the teenager to a lonely place, where they killed her, burying her by a granite rock. She died without having been baptized.