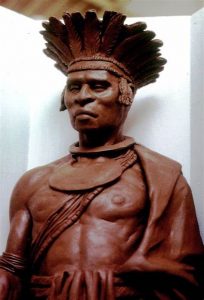 “I will stay with the Fathers and Sisters.”

Tapiedi’s father was a sorcerer, who died when his son was still young. Taught in Christian mission schools Tapiedi became a teacher and evangelist at Sangara Mission station.

In July 1942 the Japanese invaded the island. A group of missionaries struggled to evade capture. Among them was Lucian Tapiedi, who was determined not to abandon the missionaries with whom he worked.

They came to a village but were escorted away by men of that tribe, one of whom killed Tapiedi. The remainder of the group perished soon after; six of them beheaded by the Japanese on Buna beach. 333 Christians lost their lives in New Guinea during the invasion and occupation of the island by the Japanese forces. Lucian Tapiedi’s killer later converted to Christianity. He took the name Hivijapa Lucian, and built a church dedicated to the memory of Lucian Tapiedi.