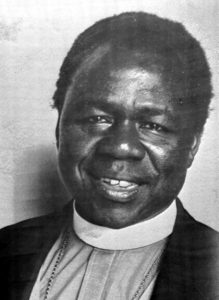 “I am prepared to die in the army of Jesus.”

He became a Christian in 1948. Luwum had a reputation for creative and active leadership, promoting a new vision with energy and commitment.

In 1971 Idi Amin came to power in Uganda and ruled by intimidation, violence and corruption.  As Archbishop of Uganda, Luwum pressed ahead with church reform but he also warned that the Church should not conform to “the powers of darkness”.

Luwum sought to mitigate the effects of Amin’s rule, and to plead for its victims. In February 1977 he delivered a protest to Amin against all acts of violence that were allegedly the work of the security services. Church leaders were summoned to Kampala and then ordered to leave, one by one. Luwum confided to another Bishop “They are going to kill me. I am not afraid.” Finally alone, he was taken away and murdered.