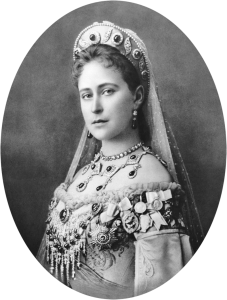 “I am leaving a glittering world where I had a glittering position, but with all of you I am descending into a greater world – the world of the poor and the suffering.”

Although she was born into royalty with all its comforts Tsarist Russia was in turmoil only maintaining its power by repression. Talk of revolution persisted, and grew louder. The assassination of Grand Duke Sergei in 1905 was a turning point in Elizabeth’s life.

She gave away her jewellery, sold her most luxurious possessions, and started a home for women, a hospital and charitable works. She was part of group dedicated as Sisters of Love and Mercy.

In 1917 the Bolsheviks seized power. In power, it persecuted the Church with terrible force. Elizabeth was arrested with two sisters from her convent. The night after the Tsar’s family was shot dead Elizabeth along with a fellow nun and members of the royal family were murdered in a mineshaft.